[If you have read Fact #1 and/or Fact #2 of the current series, you have already read the premise. Thus, you should skip it and proceed to read Fact #3 below]

On October 5, 2014  I decided I should embark on writing a series of short newspaper-like articles with the goal of attracting attention to explanations of the current situation of the Italian economy alternative to the ones offered by the (overwhelmingly neoclassical) austerity lovers. While I had not planned to publish both in Italian and in English, the ‘likes’ I got on the first three pieces in Italian convinced me that I should go the extra mile and publish them in English as well.

Fact # 3: True, the Italian labor market is highly segmented. Meaning what? Meaning that in Italy we have a variety of labor contracts hardly seen anywhere among the high per capita income countries. So what? Who wanted a terrific expansion of short- and very short-term contracts? Organized labor!? But then, let us look at numbers: if ‘atypical contracts’ stands for ‘flexibility’, then Italian workers are terrifically flexible…

Let us try and reason about the issue of ‘labor market segmentations’ just like a person in good faith would (which is what we always do).  The first thing to make clear is what is meant by ‘segmentation’ of the labor market. In this country trade-unions, that is, unions among workers belonging to the same trade, do not exist in the way they do in the US. Here we mean that the labor market is made up of workers covered by long-term contracts, usually represented by trade unions, and workers under a tremendous variety of short- and very short-term contracts, or ‘lavoro precario’, hardly represented by any trade union. And that for the basic reason that it is nearly impossible that anybody working under a 6-month contract may seek to join a union!

So, the next question is:  Who benefits from such a segmentation? Perhaps those who have been pushing for shorter and shorter contracts? And if so, is it reasonable to imagine that it was the ‘lavoratori precari’ themselves?

Basic economic theory helps find an answer to this question. The labor market, even though not the fish market that many would like it to become, can be represented by a system of two equations in two unknowns: these equations we call ‘labor demand’ and ‘labor supply respectively. Firms demand labor as a necessary factor for the satisfaction of demand for goods and services; we supply labor.

Of course, it must be very clear that a ‘market’ is never just the happening of an exchange; rather, the ‘market’ is first and foremost the set of rules within which demand and supply would like to meet –that is, to ‘strike the deal’. If all this happens, if the meeting takes place within the given set of rules, then we will observe an equilibrium wage and an equilibrium level of employment (not necessarily a ‘full-employment’ level of employment). This is when production gest started. Good.

Of course, one could complicate things further: the legislator may  dictate that the new rules are mandatory for all firms when they hire a new entrant, so that new entrants will be hired under the new set of rules; or he may leave to the individual firm to choose the set of rules (the contract) under which to hire new entrants. Whichever way, there will be two labor markets, not one.

Workers, and their unions, will obviously oppose such legislation. Indeed, the new rules weaken both workers and unions, new entrants and ‘old’ workers. Such weakening of unions and workers, young and old, will be the stronger the more firms are allowed to choose individually whom to hire, the young under a set of rules and the old under another.

The answer to our question is therefore sufficiently clear: the legislator has ruled in favor of firms. The effect of that? A labor cost lower for the first-time entrants that for the incumbents, a weakening of the bargaining power of the incumbents, an overall lower average wage across the two groups of workers. In short: we know who has been fighting for the two-labor-market model, and why.

Figures 1.A and 1.B document the evolution of the ‘dual labor market’ phenomenon and the changing weight of each of the two in several high per capita income countries.

Figure 1.A shows that Italy does not qualify at all as the country with a ‘rigid labor market’: the share of limited-time contracts in Italy start low and then grows over time, but never shows a particularly low value, which the UK does over the whole period, or a particularly high one as Spain does.

Since it is not easy to get more than a feeling from Figure 1.A due to the high values for Spain relative to all other countries, we reproduce it as Figure 1.A.bis, where data for Spain have been deleted. Before moving on to Figure 1.A.bis, however, let us draw a couple of  interesting lessons from Figure 1.A: first, the extraordinary flexibility in the Spanish labor market has not been able to save that country’s economy from the hardest od the recessions; and second, an economy made of firms determined to shut down needs a legislator who supplies incentives to the use of short-term contract.

Easy comment: between 2000 and 2013 the share of limited-time contracts has gone from 10% to 13% of the total, that is, from below to above the OECD average as computed an all its member countries, and from fifth-out-of six of the reported countries, to second. So, why has not anybody seen any labor demand increase in those years? Even more straightforwardly: have Italian firms began hiring, now that the much desired ‘flexibility’ is on the rise? Surprise: flexibility does not produce labor demand!

With Figure 1.B we simply want to make it easy to evaluate the differential speed at which the share of limited-time contracts has been changing in the same countries as above over the same timeframe. 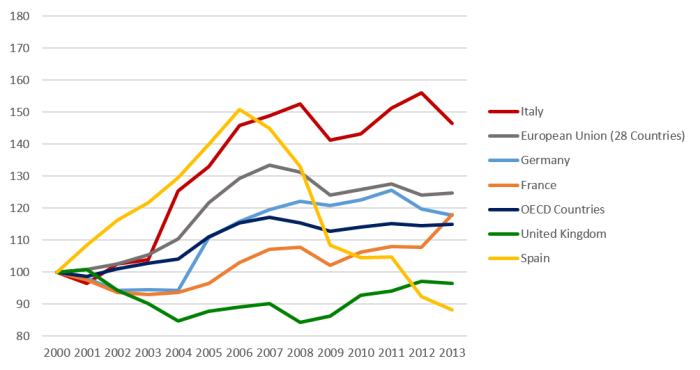 Nothing new relative to Figure 1.A of course, but anchoring all countries to be =100 in the base year allows to see that Italy is exactly the country where the share of workers with a limited-time contract has been growing faster among the countries reported as well as relative to the OECD average.

It is worth noting that in 2008-2009 the share falls in Italy little relative to the Spanish one. Interesting: can it be that in Italy job losses took place within both cohorts of employees, ‘protected’ ones and ‘unprotected’ ones. Well, if such were the case, there would not be much of a case for the infamous story about (at least part) of Italian employees are overly protected, right? Fact # 1, where we claim that Italian employees are NOT overly protected, finds additional support.