On October 5, 2014  I decided I should embark on writing a series of short newspaper-like articles with the goal of attracting attention to explanations of the current situation of the Italian economy alternative to the ones offered by the (overwhelmingly neoclassical) austerity lovers. While I had not planned to publish both in Italian and in English, the ‘likes’ I got on the first three pieces in Italian convinced me that I should go the extra mile and publish them in English as well.

Why does Italy find it hard to attract Foreign Direct investments (FDI)? May this be due to the presence of trade unions and overly protected labor force?  NOT TRUE: FDI are scarce because a very large proportion of our firms are based on production processes that are intensive in unskilled labor, that is, they produce goods that can be produced anywhere in the world.

Readers even moderately knowledgeable about Italian things know that the FDI issue is very much felt and debated in the country. Why, one is often asked, do we receive such a disappointing amount of FDI (per head, of course)? Why does global capital not appreciate Italian firms, how is it that the famous ‘made in Italy’ does not receive the attention it surely deserves –and does not activate investing interests and inflow of industrial capital therefore?

The oldest story on sale by firms, as well as by their associations, is that centered around ‘the taxes’.  We do not attract foreign capital, we have been told over and over again, because taxes in this country are too high. And they have been clamoring for the legislator to issue legislation that would be beneficial to both producers and consumers, something ‘simple’, whose effects should be clear to one and all: the ‘flat tax’. Year back, a nice 19%, just like it used to be in Bulgaria (I do not really know whether there the situation is still the same). So entrenched is this idea that on December 24, 2014 I witnessed one of the usual suspects heralding the same request on a nationwide TV channel, the difference being that this time we were told that 20% is the perfect rate.

Needless to say, yours truly was, and is, making fun of such ideas, while at the same time offering the example of a country (actually, more than one) whose marginal tax rates on individuals and distributed profits  are ferocious but, surprise, whose ability to attract FDI (per resident head, of course), is among the highest, and perhaps the highest, in the world.

Changing times, changing the (principal) culprit. More recently, labor cost has become the main source of discouragement for international investors. That is, the story goes, Italian labor cost is too high, or, rather,  labor cost is not really too high, it is take-home salary that is too low relative to labor cost, a fact to which one ought to add that there is no labor market flexibility….Well, about labor cost, net-of-tax salaries, labor market flexibility, and overly protected Italian employees we have written in Facts 1, 2, and 3: fairy tales.

Problem is, while entrepreneurs and their associations are busy unloading the blame on employees and trade unions, left-leaning individuals and organizations have been claiming that the ‘true’ reason foreign investors shun Italy is….mafia and corruption.  An incredibly beautiful synthesis of these hitherto differences took place on December 17 when Confindustria, the major association of entrepreneurs, centered its report on the state of industry on the issue of…corruption! Perfect.

Obviously, the reader will have noticed that for all parties involved the culprit is always ‘somebody else’: taxes, fiscal drag, employee over-protection, labor market inflexibility, mafia, camorra, corruption….oh, I was forgetting, the Italian bureaucracy, how could I possibly forget the infamous Italian bureaucracy!?I

Strangely enough, not once we hear a word about what everybody seems eager to see bought, at least in part, by foreign investors: that is, the thing itself, the firm. Which amounts to ask what makes Italian firms, on average, a juicy, yet unappreciated, target for foreign investors. Let us ask the correct question: why should a foreign investor, individual or investment fund, acquire shares of an Italian firm? This is an innocent enough question, is it not? Is it not the same question that any of us would ask while considering acquisition of a firm regardless of the country she is based in? A foreign investor considering acquisition of a firm is not considering purchasing shares of the well known (mostly to Italians, I know of no other countries where the concept is used or even exists) ‘sistema Italia’, right? Obviously we all understand that, everything else being constant, it will be less risky to invest where there is no mafia rather than where there is, where there is less bureaucracy than where there is more,…Yet, trivialities aside, can we please ask the relevant question: to invest in what? In what type of firm? Producing what? In what industry? In brief: what are the features of a firm that attract a (foreign) investor? What the ones that repel her? Because you see, and let me repeat myself here: the (foreign) investor buys firms first, she does not buy the Uffizi –though they too are part of the famous ‘sistema Italia’, right? Do foreign investors price the Uffizi in when considering the purchase of Italian firms?

Figure 1 reports on the investment expenditure in a number of countries, per employee, in 2012. A detailed comment of the figure is not really required, but a question may be in order: why, exactly, should a foreign investor acquire shares of industrial working capital when Italian residents do not!? Alternatively: why invest in firms whose employees do not appear to be working with physical capital enhanced by new, substantial injections of new investment?

Figure 1. Investment per person employed in manufacturing (Thousands of € per employee, 2012[1]) 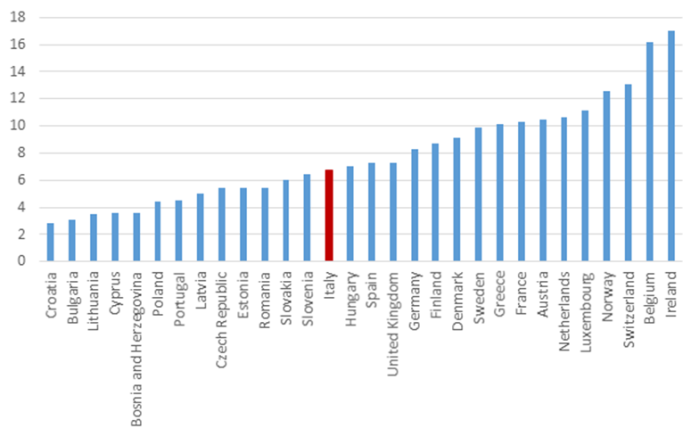 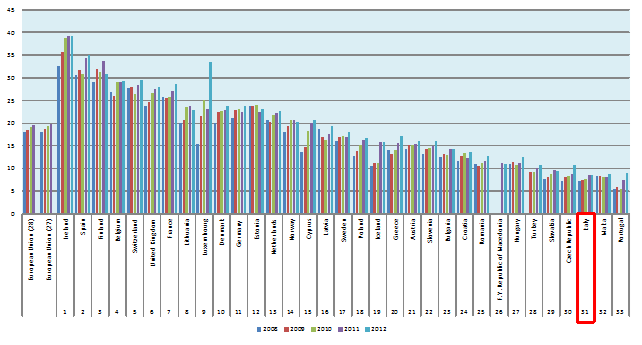 Low investments in physical capital per employee, well-below-the-average share of tertiary education profiles among their employees –where this is just a proxy for the quantity and the quality of human capital employed – necessarily translate in what Figure 3 tells us: the share of high tech exports over total exports is laughable relative to those exhibited by high-per-capita-income countries.

Which all goes to prove what we were claiming at the outset: Italian firms are most likely to be producing to satisfy world demand of goods produced with a relatively high intensity of unskilled labor. Other, seems to be thought, will take care of producing, and exporting, products generating high profits and high salaries. Which is where foreign direct investments like to go.