Something good has come from the week of passion: Europe got the message. After one year and a half invoking for fiscal austerity in ‘bad’ countries, many economists are now arguing that the European crisis, rather than a debt issue, is more a problem of the Euro threatening the foundation of the currency area [i]. Even politicians seem now more cohesive than before, as the deal reached last week at the Brussels summit showed. Although it is likely that some country will raise doubts and questions about the solution (as it always happened in the past), it is a first step for the EU towards something more than a monetary union.

In fact, among the solutions of the so-called Marshall Plan for Greece , there is the possibility for the EFSF to buy government bonds on the secondary market under certain conditions, as it was suggested here on may the 30th , and the ECB will be able to accept even ‘junk’ sovereign debt bonds. A relevant use of Eurobonds is still far from sight, but the EU is approaching them. For a while, demands for austerity have been left aside, as it has not worked so far. Despite government spending cuts, Greece, Portugal, Ireland, Spain and Italy have seen the spread of their government bonds with respect to the German ones constantly rising. Behind austerity policies was the idea that if the solvency of a government is doubted by markets, decreasing public spending would restore confidence, reducing the cost of financing. However, this did not happen. Why?

First of all, austerity measures were asked by the IMF and the EU as conditions for loans. Austerity was not considered, in and of itself, the solution. Yet, as Euro members lacked the necessary commitment and showed contrasts in proposing solutions [ii], financial markets did not deem bailout plans reliable, asking more and more interests on Greek debt as ratings were falling. Secondly, as Krugman [iii] suggested, austerity does not work anyway. The idea that rigorousness restores investors’ confidence is just a myth. Keynesian macroeconomics predicts that when a country is facing high level of unemployment, as Greece after the financial crisis, reducing government spending depresses further the GDP. As the GDP falls, government revenues are diminished and so does its capacity to repay the debt. Actually, those who sustained austerity were arguing that the Greek problem was a lack of competitiveness, due both to a higher inflation trend and to a lower increase of total factor productivitywith respect to other European states. Unemployment brings about deflation, and deflation restorescompetitiveness in a country that cannot act on monetary policies. Yet, countries usually do not fight lack of competitiveness allowing unemployment. But a country that lost control over monetary policies is still a country?

From an economic perspective Greece has more in common with what we call a region than a country. As well as the other members of the euro zone, Greece progressively left its economic policies to the EU. In particular, adopting the euro meant for Greece losing its control on the exchange rate and monetary policies. It is not time now to discuss advantages and disadvantages of such decision. This is the current situation: Greece cannot devalue its currency to improve competitiveness or offset speculative attacks on its bonds, nor it can keep the interest rates set by the central bank near to the zero lower bound. Fiscal policies are constrained by high unemployment from one side and fears of default on the other one. It would be as if Lombardy, after years of debts and spending was no longer able to borrow from banks in order to pay health care. Should citizen in Lombardy be considered responsible and left without health care? Or should the Italian state act by backing Lombardy’s debt (and maybe preventing this kind of situation)?

That is why we need a common fiscal policy, as Jeffrey Frankel has argued in order to have an optimal currency area. And once we will have it, how would Eurozone seem in comparison to other countries in the world? From a naïve perspective, it would be a very strong Eurozone-state. In fact, as shown in figure 1 below, the so-worrying government deficits would suddenly become very narrow, from a relative perspective. Japan, United Kingdom, and United States would be all in greater danger than Europe – if having a deficit could be considered as a dangerous and improper condition. 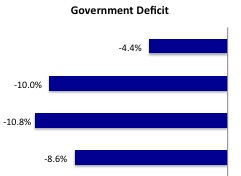 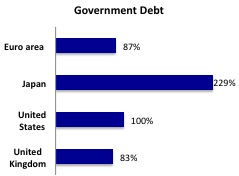 Moreover, the unsustainably high levels of government debt of the European ‘bad’ countries, Greece, Portugal, and Ireland, would unnoticeably disappear. In fact, if they were to be absorbed by the very bigger government debts of Germany, France, and Italy plus Netherlands (since combined they have a GDP similar to France), the change in the ratio of government debt over GDP would be considerably small. And the story goes similar for the government deficit ratio over GDP, as depicted in the figures 2 and 3 below. Then, does it make any relevant difference that the German deficit increases by 0.5 percentage points in 2011? Greece is no more a totally separate country from Germany. A European process of unification is going on since the 1960s. We must acknowledge it. We must recognize that the differences between Greece and Portugal are no more dramatically dissimilar than the differences that exist between Bavaria and Saxony, two German Länder, or between Lombardy and Sicily, two Italian regions. 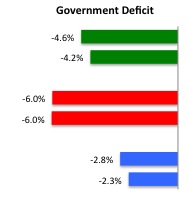 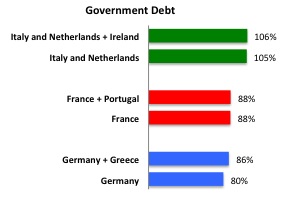